She is primarily a tattoo artist, but she also has experience as an actress from the period when she worked in the small scene of the F. X. Šalda Theater an later as a make-up artist. But now it is completely occupied by tattoos. She is the co-owner of the Rasgtattoo studio in Liberec. In the past she won 3 first places for the best tattoo as a model. In 2021, she worked at the Tattoo Event Pardubice as a member of jury, where she selected the best works from all over the Czech Republic. She attends exhibitions of unknown (underground) artists and would like to support them as much as possible. The beginnings are not easy as she tried on her own skin. She is interested in street art and would like to organize an exhibition of works by various artists in Liberec called Street Galerie Liberec. She spends her free time mainly with her family or by making various designs. Her motto is "when it's not about life it's about ...." 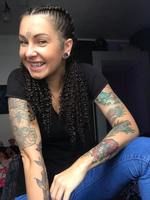