Hubert Bittman is a composer and producer, holder of the 2009 Grammy Award. In the mid-1980s, he co-founded the Experimental Studio of Czechoslovak Radio. In 1989 he emigrated abroad, where he started to work first as a sound master, then as a music director, studio musician and music producer.

He writes music in a wide range of genres, from filmmaking to musicals and audiobooks to television or radio commercials. As an author and producer, he mainly works for Spiegel TV, National Geographic Channel, BBC History, ARTE, Phoenix, ZDF, GDR, MDR, American Experience - WGBH Boston, Czech Television and others. In genre of jazz music, he co-produced a music recording for the movie Rising above the Blues - The Story of Jimmy Scott (2009–2017). In the Czech Republic, he produced the project Radim Hladík, Blue Effect and Gustav Brom's Radio Big Band - 2014 New Synthesis (performed at Rock for People music festival in 2014). From classical music he produced, for example, recordings of well-known operas by Georg Friedrich Händel - Ariodante, Admeto, Imeneo and others and Richard Wagner - Der Ring des Nibelungen WWV 86 (2005–2010).

He is an author of music for audio books of Biblical Poetry: Song of Songs, Job, Ecclesiastes, Psalms, Proverbs and also for the Windmills and Songs. For the last three years he has been working with the Severáček choir from Liberec on a Christmas musical project. 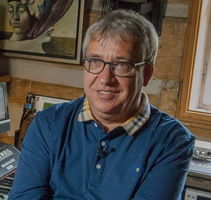