Leon Jakimič is a Czech businessman and founder of the glass and design company LASVIT. He founded the company with the aim of promoting the reputation of Czech glassmaking and the region where glass has been produced for six centuries.

He comes from Liberec from a family with a glassmaking tradition lasting for six generations. He graduated from primary and secondary school in Liberec and lived in the Ruprechtice district of Liberec until he left in his 19teen for university studies in California. From his 24, he worked and lived in Hong Kong, where he also founded LASVIT in 2007. However, the company's glass production has been in northern Bohemia since the beginning. The company has now there its own glassworks, metal production, most of the management and development team, and 300 of its total 400 employees.

Leon never lost his love to Liberec and regularly came back to the Jizera Mountains to ride a bike or cross-country skiing. In July this year, he moved back to the North Bohemian metropolis with his whole family. "I like the Czech sense of humor, culture and I also missed the nature that is beautiful around Liberec. For me, this place is beautiful and ideal for living, but I would like it to be even more beautiful and for people from all over the world to know its advantages." 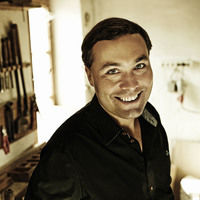