She was born in České Budějovice, spent her childhood in nearby Dívčice with her parents who worked in manual professions and with her older sister Jitka. She attended primary school in the neighboring village of Zliv. At the age of twelve, her doctors amputated her right lower limb to find a cancer in her knee. A series of long-lasting and demanding chemotherapies followed. However, her health was again complicated by metastases in her lungs. Therefore, she underwent bone marrow autotransplantation and eventually recovered from a serious illness after demanding treatment. After graduating from primary school, she studied technical administration at the Industrial School of Mechanical Engineering in České Budějovice. In 1995, she was approached by the coach of disabled athletes in České Budějovice, Jiří Smékal, and at his instigation, she began training and competing successfully with disabled athletes. In the javelin throw, she won a silver medal at the European Championships for Handicapped Athletes in 1997. After high school, she graduated from the College of Social Law in Prague. In addition, she improved her English at a language school in České Budějovice. At the age of nineteen, she started swimming and moved from Dívčice to České Budějovice to be able to train intensively. On behalf of the KOH-I-NOOR Physical Education Unit in České Budějovice, she actively participated in swimming competitions in the Czech Republic. In addition, she worked for eight years in the Department of Social Affairs at the Regional Office of the South Bohemian Region and then for six years in the legal department at E.ON.

At the age of thirty, she promised to herself to cross the La Manche Channel in ten years. After moving to Liberec with her partner, she therefore began intensive training at the Slavia Liberec Physical Education Unit. After many years of intensive training, which also included hardening, on August 25, 2019, she became the first handicapped swimmer in the world to cross the La Manche Channel. A distance of 38.5 kilometers she managed to perform in 12 hours and 31 minutes. She is currently employed at the Regional Hospital in Liberec and is still preparing for other sports competitions.

In 2019, she received the Honor of the Governor of the Liberec Region for her extraordinary sports performance, and in 2021 the Medal of the City of Liberec. 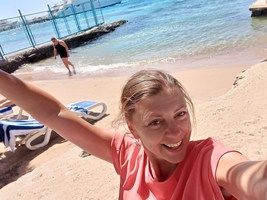