Choirmaster and artistic director of the successful Liberec children's choir Severáček. She took over the choir with her husband Petr Pálka in 1997, since his tragic death in 2006 has been leading Severáček by herself.

During almost 25years being with Severáček, Silvia has been continuing the successful era of the choir started with the leadership of the Uherks´ founders, she won a number of choir awards both at domestic and foreign competitions, including Pärnu, Preveza, Riva del Garda, Busan, Prague, Bratislava, incl. individual choirmaster appreciations. In 2004 she received the Choirmaster - Junior Award from the Union of Czech Choirs, and in 2017 she received the prestigious František Lýsek Award. In 2016 Severáček won the award for the best Czech children's choir, in 2018 it collaborated on Advent concerts with the Czech Philharmonic; the choir also collaborates with television and radio, and regularly performs in opera performances of the F. X. Šalda Theater. Within more than 60 years of its existence, thousands of children have passed through Severáček, and many of them have become excellent solo singers. 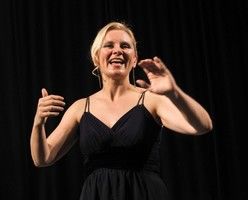