Born in Gliwice, Poland. Graduated Polish philology and Film Studies at the University of Wrocław and European Studies at University of Aachen. Since 1999 based in Berlin. She has grounded and directed the film festival "The Rolling Movies", which took place along the German-Polish border. She works since 2011 for the German-Czech-Polish „Neisse Film Festival” in the border triangle, since 2014 as a director of the festival responsible for program and business. She was a member of the jury at the Solanin Film Festival in Poland, at the DOK Kassel, at the Provinziale Film Festival in Eberswalde and at the Filmkunsttage Sachsen-Anhalt. She is also a member of the jury for the Deutsche Film- und Medienbewertung (FBW) in Wiesbaden since 2014, since 2015 spokeswoman for the Sorbian-German film network Łužycafilm, 2019 - 2022 member of the Artistic Advisory Board of the Lausitz Festival and since 2021 member of the Film Advisory Board of the Kulturstiftung des Freistaates. 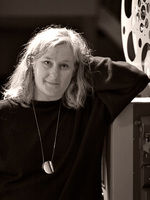