Osamu could be a typical Liberečák (Liberec citizen) if he was not born in Tokyo. He spent his early years in several modernist settlements in Asia and Europe which had clear impact of becoming an architect focused on creating a more livable city. After leading the Czech architectural magazine ERA21 in Brno for seven years, managing the program of international urban conferences reSITE in Prague for five years and researching the functioning of architectural foundations and centers in Chicago with the help of Fulbright-Masaryk Scholarships, he became almost two year ago the fifth Dean of the Faculty of Art and Architecture of the Technical University in Liberec.

Outside the university campus, you will probably meet him later in the afternoon at the Balcars, round the dam or in the pool, at Fryč bookshop, in Lázně Gallery, in one of the Asian bistros, in Billa grocery, in Vokno pub or biking somewhere at Maliník. In addition to being the ambassador of the ECOC Liberec 2028, he is also the chairman of the Prague City Council Commission for Art in Public Space and a member of the Commission for the Development of Urbanism, Architecture and Public Space of the Prague 7 City District Council. In the evening he enjoys performing in urban act Virtual Ritual, or works on illustrated book for children named City for Everyone therefore he seeks development of new approaches to architectural education towards the general public. 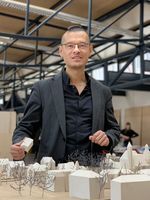