He was born in Chrudim. Between years 1978 and 1982 he studied FAMU in Prague - the Facultry of Production and Management. In years 1993, 1995 and 1996 he did cultural management at The Amsterdam Summer University.
The first professional puppetry experience he had gained in 70’s in the DRAK Theatre in Hradec Králové. After studies of FAMU - Faculty of Production and Management he started to work as art manager in the ALFA Theatre in Pilsen. The third theatrical work experience came in 1989 with the Naive Theatre in Liberec. The most important for him and his professional development was the attendance in tender for the new director of the Naive Theatre. The competition was succesful for him and he was named to the position by the Council of Liberec City in 1991. Between years 1994 - 1998 he was the administrative director of the International Festival DIVADLO in Pilsen, one of the most important theatre events in the Czech Republic. His work experience was also developed by Art Management Interships abroad. He was one of few directors who influenced the evolution of theatre by managing the theatre, but not by entering the proces as a director of theatre plays, artist, dramaturgist or music composer. Thanks to this fact he could kept the good objective point of view and to use the diplomatical instruments to reach the fluent artistic development of his theatre, which is on the top of the puppetry field for many years. For these skills he gained the respect at home and also abroad. As the member of UNIMA International Organization he was twice elected as the vicepresident, 8 years he chaired the Commission for international Festivals and now he stays its member.
He is the active member of Board of Directors of Czech ITI, UNIMA Czech, Czech Professional Theatres Asociation. As the organizer of unique international festival MATEŘINKA, which is focused on professional puppetry creation for pre-school audience, he had created and developed the festival during the years to the highly respected event, which is appreciated by many professionals and creators from around the world. 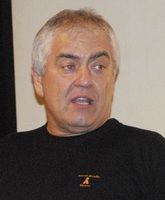