Elefsina, Eleusis or ΕΛΕVΣIS. These are variants of the write of the same Greek city, which in 2023 we will also remember as the European Capital of Culture. The word ΕΛΕVΣIS in ancient Greek foreshadows the arrival of someone or something significant. One of the most important Greek playwrights, Aeschylus, announced himself in the 6th century BC, and in 2023 we can expect countless art shows, concerts, exhibitions, performances and other cultural projects that will flood the entire city and the surrounding region.

Elefsina is a port city, located about 20 km from Athens. But if we want to associate azure beaches and parasols in mixed drinks, we would probably be disappointed. Most Greeks allegedly view the city as a bather, suffering from a polluted environment, a tax paid by the entire coast of Attica for the large concentration of industry that has been concentrated in the area in the past. The high level of industrialization is in painful contrast to the cultural richness that the city has kept as its ageless secret since antiquity.

However, Elefsina is now not afraid to share its secrets with the rest of Europe or the world. However, the ancient myth and the unique ethos of the city as such would not be enough for the ECoC title. Each of the named cities is obliged to present a comprehensive vision of the artistic programme and strategic cultural development for the coming years. Elefsina was processing its application at a time when Greece was going through an economic crisis and many other countries were also struggling with growing Euroscepticism. The ECoC title is more than a prestigious crown. It's about opportunities, the ability to see new possibilities, about finding and finding together, connecting and much more. Elefsina was well aware of the potential of the ECoC and skillfully worked with it. In the competition for a cultural metropolis, she thus recognized an opportunity to withstand the economic crisis with a comprehensive vision of a new model of development with a focus on cultural benefits. Such a development model will be sustainable and environmentally friendly. 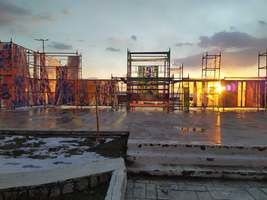 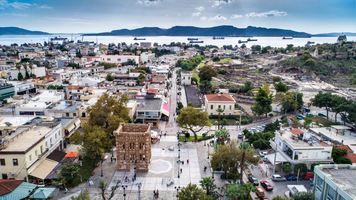 Since ancient times, the city has boasted the cult of Demeter, the goddess of agriculture and the legendary Mother Earth. However, with its extremely polluted coastline, it has rightly been pouring ash on its head in recent decades. Demeter's respect in ancient times was also accompanied by the celebration of her daughter Persephone. It is a well-known metaphor for the changing of the seasons, and thus of change and rebirth. The change in the approach of each individual and his relationship to the world around us has thus become the dominant line of the city's cultural programme. This can then be summarized in the used motto that accompanies the Greek candidacy, "Transition to EUphoria" (loosely translated as "Transition to EUforia"). And it is the model of the transition to a tolerant and sustainable future that is to become a model and a catalyst for the whole of Greece, and therefore the whole of Europe.

No need to say, the coronavirus epidemic dealt a tangible blow to culture. Increased security measures, together with reduced mobility and meetings, have resulted in the disruption and shift of many cultural events. The European Capitals of Culture have not escaped such difficulties either.

The Romanian city of Timișoara won its title as early as 2021, but due to the circumstances, it will not fulfill its main artistic program until 2023.
Timișoara, also known in Czech as Temešvár - the Czech transcription is closer to the Hungarian variant of the name Temesvár, is a town in the Banat region. Many associate Banat as a cultural Mecca, in which the thoughts and visions of people from all over Europe are mixed. And it is well known that where there is plurality and diversity of views and characters, culture thrives. That is why Timisoara boasts one of the first public libraries, three official theaters in three different languages, eight universities, but also important technical and scientific inventions. Timișoara was also the first European city with electric street lighting, and it was the last mentioned primacy in 1884 that the city followed with its artistic programme, which is dominated by the appeal "Shine your light! Light up your city! ”(Loosely translated as“ Light your city!

The call encourages double mobilization. In addition to motivating us to find the inner creative light within ourselves, it also encourages us to use the light thus found in the treatment of dark passivity. Through individual sparks of light, Timisoara has civic energy ignited in order to stir up the struggle with a lack of social belonging, the loss of public space, to fight against negative indifference, prejudice and stereotypes. Bringing citizens to the streets and returning the city to the people is not an idea for which Timisoara would have to go far. The revolutionary appeal, calling for great changes, beginning in the streets, refers to the Romanian Revolution, which in 1989 foreshadowed the fall of the Ceaușescu regime in the streets of Timisoara.

Together with the ECoC title, the city has set itself the task of fully fulfilling its potential, from a historical perspective, to heal local capacities and initiate changes to revitalize the whole of Europe. It is no wonder that in a world full of uncertainty, misinformation and skepticism, the process of any change is built first on the solid foundations of collective sensitivity, an open and visionary approach. This is the only way out of the darkness that is flooding different parts of Romania and the whole uncertain world in various waves.

Veszprém is a Hungarian town situated in the immediate vicinity of Lake Balaton. As part of its candidacy for the European Capital of Culture, the city has created a region of allied cities, towns, villages and towns in the region to work together in the coming years for organic development, not only cultural but also social and economic. The ECoC journey does not end with a title and a grand celebration of the year, on the contrary! From the beginning, Veszprém planned far beyond 2023 and beyond the city cadastre. The region will be transformed into a creative network of communities with strong cooperation ties, and in the northern tip of the largest lake in Central Europe, countless cultural projects with significant overlap will be supported, cultural infrastructure or, for example, sustainable tourism will be developed.

The concept of sustainable tourism is an issue that the city has been struggling with for a long time. Although Veszprém can benefit from its geographical location in the summer months, the fall out of season is all the more noticeable. Sunny beaches, fruit wine, singing and gurgling full of castles or theaters are replaced by the grave silence of the overwhelmed countryside in proportion to the falling temperature. Veszprém is the natural center of the region due to its size, yet the city has only about sixty thousand inhabitants. Like countless other smaller European cities, it is facing an identity crisis, with locals finding it difficult to relate to the city, young people leaving metropolitan areas, the population aging and the countryside stagnating. 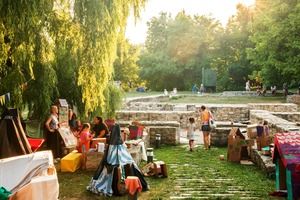 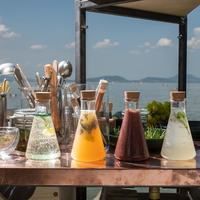