Being the European Capital of Culture has contributed to ...

Building the sense of a common community

Plovdiv (Bulgaria) 2019 was successful in citizens engagement, participation in the city's cultural events became a completely natural part of the life of its inhabitants, both due to the increase in the number of cultural initiatives in the city (including the Roma district Stolipinovo) and their diversity.

Leeuwarden (Netherlands) 2018 built the entire project on the participation of the city's citizens, which, in addition to the users of the title, made them those who breathed life into the European Capital of Culture. 70% of the Friesian population was involved in the projects and 10% volunteered. This is how a new wave of Friesian amateur artists was born!

In Donostia-San Sebastian 2016 (Spain), approximately 60% of the projects were characterized by the involvement of local people. This has helped to achieve the goal of promoting cohesion and building mutual understanding and respect.

Regeneration of the city

Marseille-Provence 2013 (France) has physically transformed itself with the help of institutions such as the Museum of European and Mediterranean Civilizations. The European Capital of Culture was part of an investment project in new cultural infrastructure, which was in turn integrated into a decades-long overall revitalization effort for the city. Marseille 2013 received EUR 16.5 million for the project from private sponsors from 207 companies.

In Košice 2013 (Slovakia), thanks to the cooperation of the private sector and the local university, the industrial city was transformed in order to awaken the creative potential of the city and its actors, create new cultural infrastructure and establish Košice as the main tourist center for the Carpathian region.

In Aarhus 2017 (Denmark), 1,200 international artists took part in the cultural programme, app. 80% of the projects took place with the participation of an international partner and / or as part of a cultural exchange in Europe.

Out of the 5.2 million tourists who visited Wroclaw in Poland in 2016, 1.6 million came from other countries, which meant a significant increase in the number of foreign tourist stays during the year.

It is estimated that every euro of public money invested in the ECoC project in Mons 2015 (Belgium) generated 5.5 to 6 euros for the local economy.

In 2018, Leeuwarden 2018 (Netherlands) and its region Friesland visited a record number of 5.8 million tourists. The economic impact on the region, including spending generated by other tourists and income for the cultural sector, is estimated at around € 300 million.

During the Wroclaw 2016 (Poland) project, more than 40% of the city's cultural and creative industries showed an increase in turnover. 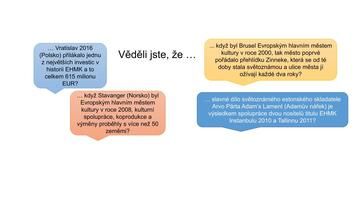