Liberec is a pulsing and exciting city, it has a chance

In the seventh of a series of interviews with the ambassadors of the European Capital of Culture Liberec2028 initiative, we present the views of Jaroslav Rudiš, a writer, screenwriter, author of theater and radio pieces and musician. He wrote the novels Heaven under Berlin, Grandhotel, Potichu, The End of Punk in Helsinki and Winterberg's Last Journey and the short stories Národní třída and Český ráj. His books have been translated into many languages and he has received several awards for his work, including the prestigious German Literary Houses Award. Together with artist Jaromír 99 he created comics Alois Nebel and founded the music group Kafka Band.
He writes in Czech and German, lives in Lomnice nad Popelkou and Berlin. He graduated from the Faculty of Education of the Technical University in Liberec, majoring in German - history. The city of Liberec plays a major role in his novel Grandhotel, whose protagonist is a 30-year-old hotel porter who cannot leave the city. According to the story, the film was made by director David Ondříček. The main character in his German-written novel Winterberg's Last Journey, Wenzel Winterberg, almost hundred years old man, also comes from the metropolis under Ještěd. He claims to be as old as the Czechoslovak Republic and the crematorium in Liberec. Since the autumn of 2020, he has been one of the ambassadors of the Liberec2028 project. Ivan Langr, Deputy Mayor for Culture, Education, Social Affairs and Tourism, asked.

You live in Berlin, work even elsewhere in Germany, but you are at the same time an ambassador of Liberec. Why?
Liberec is a city I love to return to. Both in person and in my books like the Grandhotel or Winterberg's Last Journey. I studied here at the Technical University, I lived here for eight years in total, which means i took something from Liberec with me. Liberec is still a great inspiration to me. And this is also my most frequent transfer station. I often travel from Berlin via Liberec to Lomnice nad Popelkou, where I come from.

What are the chances of Liberec to succeed in the candidacy?
I think Liberec has big chances. It is pulsing and exciting city in the middle of Europe. Its location close to borders with Germany and Poland is great as well. Connection between past and present seems to me exciting as well.

How can Liberec and its surrounding region change thanks to winning the ECoC 2028, what can it bring to our citizens?
I think Liberec is percieved as city of sport. But is has great cultural scene as well. It will bring huge international visibility to Liberec. I remember that when Pilsen won, a lot was written about it in Germany, for example, a lot of people went to Pilsen. So it will be the same in Liberec.

Dream from the future - Liberec won the title and we are in year 2028. What should be definitely not missing in the city that particular year (programme, construction, etc.)?
I wish there was a rail connection with Prague and Berlin. Tunnel under Ještěd and an electrified double rail. That probably won't happen until then, but it's my dream. 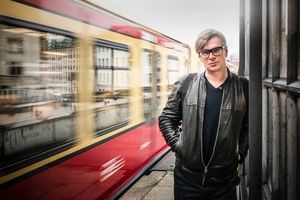